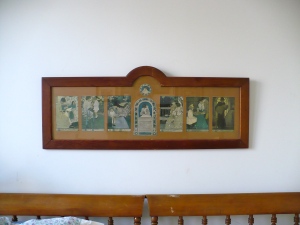 A photo of a framed series of Jessie Wilcox Smith illustrations cut out from Good Housekeeping magazines, circa the “oughts” of the twentieth century. Nancy reports that it always hung above Frank’s and Beah’s bed both in New Haven and in New York city; it now hangs in the guest bedroom of Nancy’s and Dick’s apartment. Here’s Nancy’s transcription of Beah’s inscription on the back of the frame:

The picture of a “Woman’s Day” was made by Beah’s father John Howard Gates who was born in Watterloo Iowa Oct. 26, 1865.

From 1906-08 he was a member of the Board of Education in Sioux Falls South Dakota where he practiced law with the firm Davis, Lyon and Gates until he took office as justice of the Supreme Court of South Dakota Jan 1 1913. While on the School Board, he was on the building committee for a new high school, built of Sioux Falls granite, a remarkable quartzite mined in Minehaha County. To relieve his wife of the three children’s care on Sunday afternoons, he regularly took them on outings, either walking in the pleasant weather to see new houses under construction or to pick wildflowers. On inclement days we went for street car rides! While the high school was under construction, we went frequently to check on work done during the week and we would pick up discarded tiles and small pieces of wood to play with (His grandchildren played with the tiles at Tiyopa). From scraps of wood he made the frame and mounted a series of Jessie Wilcox Smith pictures from Good Housekeeping Magazine. It always hung over the sofa in Sioux Falls and Pierre homes of the Gates family. Beatrice Gates Shuttleworth, Oct. 6 1974. Copied by Nancy Shuttleworth, Dec. 13, 2011.

A few notes on this transcription: first, reliable sources have it that Tiyopa is the Sioux word for Gates and it was written in birch bark letters on the outside wall of GG’s cabin in the Black Hills. Second, the series is actually called “A Mother’s Day” (find digital versions of the images here, and read more about Smith here), but Beah’s calling it “A Woman’s Day” reflects the extent to which a woman’s day was then a mother’s day (good helping dads John Howard Gates notwithstanding!). And finally, transcribing her mother’s inscription, Nancy must have been channeling her young daughterly self, signing it Nancy Shuttleworth! 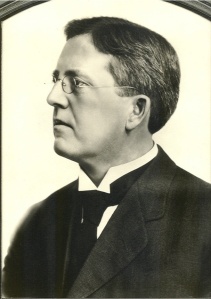 A continuation of the Boomerang blog’s family history thread, this post details the history of one of the characters pictured in the photograph featured in the post of August 26 2009, namely John Howard Gates, the gentleman positioned at the far right of the gathered personages. John Howard Gates, son of John Cook Gates and Adelia St. John Gates, was born in Waterloo Iowa on October 26, 1865. His sister, Fanny Cook Gates, was born in 1871. John Howard was famous in  some circles (see biography here) as a justice of the South Dakota supreme court, but he is most famous to Boomerang readers as the father of our mother or grandmother or great grandmother Beah. His other two children–and Beah’s younger siblings–were John Carter and Hobart Hare.

John Howard’s hometown newspaper, the Waterloo Evening Courier, kept excellent track of his life and career, including his daughter’s wedding, but we like the Iowa Press Citizen‘s announcement of that event the best:

John Howard died on November 8, 1927 at the age of 62 of “bronchitis which developed from a cold of four days’ duration” — as the Waterloo Evening Courier put it in its article of November 10th (see full item here).

This post is the first in a new category of posts: notes, news, re-tellings, and queries on the topic of family history (as you’ll see, there are plenty of the latter in this first example!). I picked this photo to start with since it depicts two branches of Nancy’s side of the family: the Shuttleworths and the Gates. 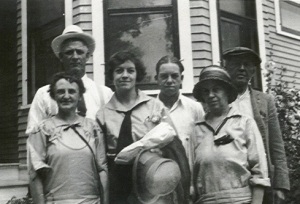 The folks on the left are Shuttleworths: Blanche (née Sokol, aka Nanny), and William D. (aka Will, aka Pawpaw — sp?). The folks on the right are Gates: from the far right, John Howard Gates, Edna Gates (née Carter, aka GG), and Hobart (Beah’s brother). The one in the middle is a mystery and one that opens other mysteries. Well, anyone can see it’s Beah, but was she a Gates or a Shuttleworth on the day of this photo? It was taken in 1924; could it have been taken right around the time of Frank and Beah’s wedding — hence the gathering of the clans? When were Frank and Beah married? And where? And where’s Frank? Could that be his hat that Beah’s holding? So he’s taking the picture?! And is that the Shuttleworth home in Sibley in the background?

Corrections and more information on any of the above are most welcome (click on the button that says “leave a comment”)!