Dramatis Personae of the Boomerang Blog (including family from all branches),
in alphabetical order

Eno, Beth (aka Betty Rust): Born in 1902 in Des Moines Iowa; married Orville Rust on February 16, 1924. Youngest of the five Eno girls. The portrait below is discussed in a Boomerang post here. Find a 1922 Des Moines University yearbook photo in this post here.

Eno, Enola (November 5, 1891 – 1978): Oldest Eno daughter and a Methodist missionary in Lucknow, India for many years. There she met and married her husband Carl Oscar Forsgren; the couple adopted two children, Marylou and Bob. Read more about her in post of March 31, 2013. Read a little about Lucknow here, and read about her return voyage from Lucknow here.

Eno, Eula: Second oldest of the five Eno girls, the one who went off to catch babies in China, amongst other adventures. Read more about her in post of October 18, 2012.

Eno, Fred H: Born just before November 17 in 1863 (read clue on date here) in Elmwood Illinois, son of Daniel and Rikeline Eno; father of Beth Eno, grandfather of Dick Rust, great grandfather of the Rust kids, and author of the Weekly Family Boomerang (aka the original Boomerang). Fred is pictured at left with wife Mary. For more on both, see post of September 7, 2011 and the About page of this site.

Eno, Mary (née Loper): Born 1867; daughter of William and Eliza Loper (née Graham), wife of Fred Eno (married January 14, 1891; find a note about their 31st wedding anniversary in this post here), and mother of the five Eno girls. One of the Rust kids’ paternal great grandmothers. Also: sister of Samuel Loper (father of Lincoln and June Loper), “Auntie Helen,” mentioned here, and Mabel Loper, mentioned here and many other places too. Frequently referred to in the original Boomerang as “Mamma.”

Eno, Ruth: Born in 1898, fourth of the five Eno girls. Memories of her from Dick, recorded in this post here. 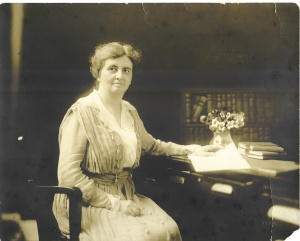 Gates, Mary Edna (née Carter), 1869-May 3, 1970 (!!): Great-grandmother of the Rust kids, to whom she was known as GG (for Grandma Gates). Before that, she liked to go by Edna Mae (even though her given name was Mary Edna). Find a picture of here with her daughter Beah (and some other people mentioned on this page!) here. Find more details on her life here.

Gates, John Cook (1838 – 1917): Husband of Adelia St. John and father of John Howard Gates and Fanny Cook Gates. Read more about him in this post here.

Gates, Sarah Frances Rumsey (1840-1920): Second wife of John Cook Gates (after the death of Adelia); read more about her in this post here.

Hastie, Louie (née Eno): A sister of Mary Loper Eno (wife of the Boomerang Man). She and her husband William “Alex” Hastie were residents of Indianola, where the frequently received the Des Moines Eno family. Read all more about the whole Hastie family in this post here.

Loper, Lincoln Leslie (1894 – 1972): Nephew of Fred and Mary Eno, son of Samuel Leslie Loper (a brother of Mary’s). Read more about him in this post here. Lincoln fought in World War I in France; find a record of his service and a picture of him in a gas mask (!!) here.

Loper, Samuel Leslie (abt. 1859 – 1929): Brother of Mary Loper Eno and uncle of the five Eno girls. Husband of Eva (or Evie) Clare Lincoln (1857-1942). Leslie and Clare’s six children (cousins of the Eno girls) were Lincoln, Dane, Alice, Edith, June, and Mable Ardis. This family makes very frequent appearances in the original Boomerang. Find links to posts featuring Lincoln in the entry for him above this one. This post here features the whole family; this one here is about Ardis’s wedding, and Alice is mentioned in this one here.

Loper, Mabel: Born on May 27, 1881: The youngest of the children of William and Eliza Loper.

Rust, Christene (née Lubbers): Born around 1861: Mother of “Beth’s twin friends,” Arthur and Orville (“Coach” Rust). Find out more about her in this post here. She was also the wife of Albert Heike Rust (born in 1854 in Germany)

Shuttleworth, Beatrice (née Gates), 1901-1986: Larger than life maternal grandmother and European tour guide for the Rust kids. Pictured in group shot below, as a baby here as a toddler here, as a bride-to-be here, and on the Ponte Vecchio here.

Shuttleworth, Blanche (née Sokol), 1869-1957: Mother of Craven Shuttleworth and Frank Shuttleworth, and grandmother of Nancy Shuttleworth Rust (daughter of Frank). Known affectionately as Nanny. Read more about her in these pages here and here. (You can also read more about her here, a page that describes the Sokol-Shuttleworth papers in the University of Iowa Library.) She’s the one seated on the left of the photo below (Nancy is the ringleted little one on the right, between the knees of Blanche’s husband Will, but that is for another entry!): 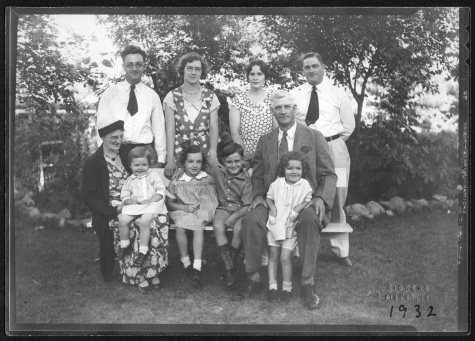 Shuttleworth, Craven and Nancy (née Kayley): Parents of Will Shuttleworth. Both were born in Yorkshire in England and came to the US in 1854. Read more about them in this post here.

Shuttleworth, William D. (aka Pawpaw): born in 1869 (the same year as Edna Carter!) in Fennimore Wisconsin. Husband of Blanche Sokol, father of Frank Shuttleworth, grand-father of Nancy Shuttleworth Rust. Find post and photo (with links to other posts and photos) here.