There are lots of cascades of jasmine around town these days, but this one is especially luxuriant — what with the turquoise-painted garage (and house!) right next door.

Leslie’s house not only has a cabinet of curiosities (see photo of March 18) but also is a house of curiosities itself; here is Exhibit A: a garland of felt skulls with sequin eyes, strung across the doorway leading from the kitchen to the living room. A person never wants for something fun to look at here!

Spring keeps on flowering as we are saddened today by the passing of our cousin (nephew, son) Greg.

The view from the top (ground) floor of UC Berkeley’s main library all the way down to “level D,” four floors underground — and therefore, theoretically, earthquake proof! Even though most of the library (since its renovation circa the early 1990s) is underground, it’s suffused with natural light thanks to a series of well placed ground-level skylights, including a cupola over this spiral staircase!

Here’s another photo of the staircase–and of the space it encircles–from a 2005 installation called “Flying Books”; read more about the installation here. 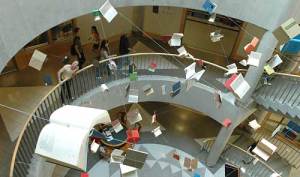 A cumulus cloud heading into some telephone wires . . . since it’s wider than it is tall, this is a humilis cumulus and does not portend rain. And indeed, it was a dry day here today! 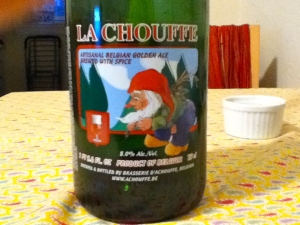 Belgian gnome beer: or, La Chouffe! From the region of the Ardennes (eastern Belgium), it’s a “blonde” ale with a cute label with a chouffe (a gnome) wearing big wooden shoes ~

A new series! According to Julian Montague’s taxonomy of stray shopping carts (read all about it here), this cart is either a “False Stray type 9” since it’s outside of a two-block radius of its source (most likely the Berkeley Bowl) OR a “True Stray, type 1,” the key characteristic of which is that it’s outside of a two-block radius of its source. Type 1 False Strays  and type 9 True Strays type are actually impossible to distinguish, says Montague, but all True Strays transition through the type 1 phase on their way to fitting into any of several categories of the True Stray. Only time will tell, then, whether this Stray will be returned to its source, thus revealing that it was a False Stray all along or will evolve into one of the more advanced species of True Stray such as the True Stray Assimilated, True Stray Private Property, True Stray Structurally Modified . . . and so on.

There was an error retrieving images from Instagram. An attempt will be remade in a few minutes.