Arcadia, an avid follower of Maira Kalman’s wonderful blog/column in the New York Times, got this scoop: a mention of Mickey Murch and his amazing movable-feast-mobile (yay!)! Here’s the photo Kalman included; read the whole article here.  I hope everyone had a lovely slow food Thanksgiving!

. . . and now a sequel of Carol and Dex’s trip report — in the form of five sketches — more thanks! 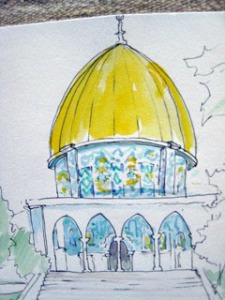 Dome of the Rock

C & D's hotel in Acco, built into the city wall 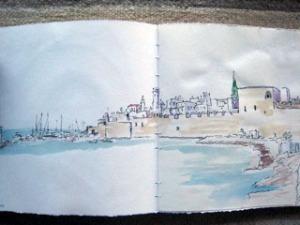 This just in from Carol and Dex (thanks)!

First a week in Jordan with a nice young driver who met us at the airport, showed us Amman, the ancient (333 BCE) Roman city of Jerash and then south with stops at crusader castles, Mt Nebo where Moses finally saw the Promised Land, on to Petra and finally to Accaba where we crossed into Israel.

Before Petra, though, he left us for an amazing day and a half to hike in the Dana Conservation area of the Royal Society for the Conservation of Nature. The RSCN has 2 Eco Lodges there. We spent our first night in Dana, an ancient and crumbling prehistoric village founded for copper mining. In the morning a lovely young man, Ahmad, met us and guided down the canyon trail to Feynan, 1,000 m. descent and 16 K. long. The topography is much like Grand Canyon with eroded sandstone cliffs and wadis with springs that give strips of green. On the way we met his younger brother herding the family goats. He made tea for us and later we stopped at his Mother’s Beduin tent for more tea. The tents are long rectangles divided into day & night use. Hers was very comfortable with carpets and mattresses. She had on a beautiful dress inour honor as Amad had called her on his cell phone.

Petra was as advertised, a half mile narrow slot canyon opening up to a fantastic  5th century BCE city. Did Beah go there with Louise?